New Year’s Eve is the biggest party of the year. It’s a celebration that brings people together to celebrate all the potential that a new year offers. It’s a day of hope and celebration.

And it’s not too far away either!

Soon, people from around the world will be ringing in the new year soon with fireworks, festivals, friends, parties, and songs. It’s a fun holiday that knows no nationality.

If you’re ready to stay up past your bedtime and indulge in the revelry, here are my top ten best places to go for New Year’s Eve in 2019: 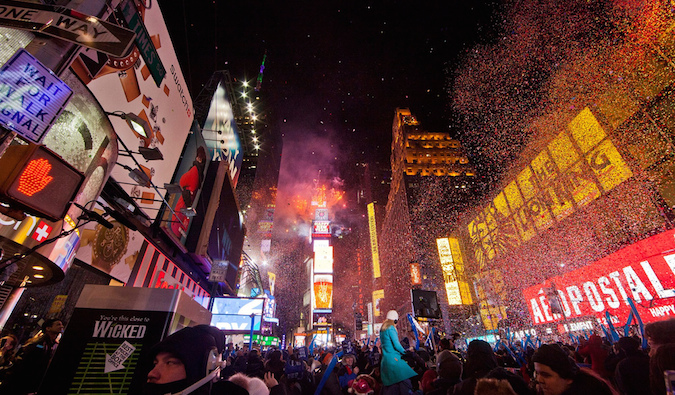 Times Square has been a focal point of New Year’s activity for more than a hundred years. Around one million people will crowd into the square to watch the famous ball drop. On top of that, around a BILLION more people will watch from home, making this one of the biggest events of the year — every year!

If you want to watch the ball drop in person, be sure to arrive early (people start gathering in the afternoon to get a good spot) and dress warmly! However, there are lots of parties throughout the city and most New Yorkers try to aim for some of the downtown clubs and bars or a house party! Australia is one of the first countries in the world to experience New Year’s Eve making Sydney the first major city in the world to greet a new year (sorry New Zealand, you aren’t as big!).  The city hosts one of the largest firework displays in the world. They last almost a full fifteen minutes and are best viewed from one of the boats in the harbor or surrounding hills. After the display, the celebrations usually last until dawn. Locals love enjoying this day as it’s also in the middle of their summer so the weather is always great! Unsurprisingly, accommodation disappears fast so be sure to book well in advance if you want to spend the New Year down under! 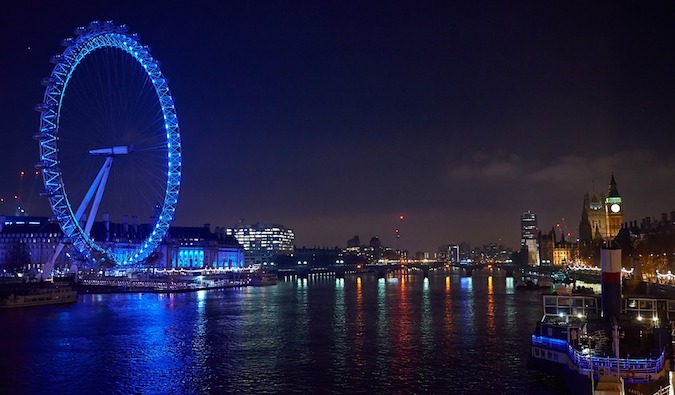 London rings in the new year with an astonishing fireworks display that’s launched from the London Eye. The fireworks can be seen from rooftops and balconies all across London, so you don’t need to leave your hotel to get a good view. If you want to get out there and really experience the display, the best views are from Westminster Bridge and the north embankment of the River Thames (opposite the London Eye). 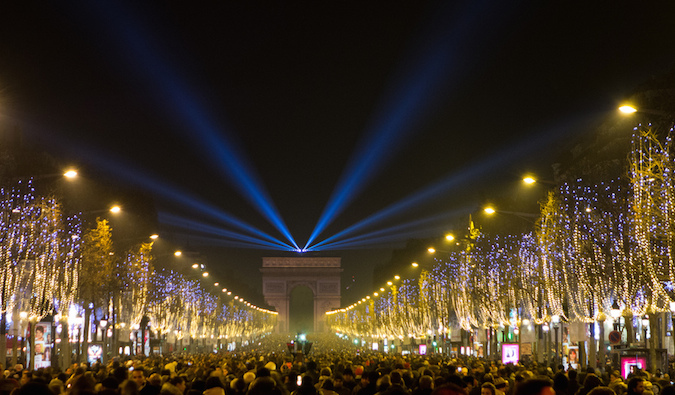 Paris is the perfect destination for a romantic New Year’s Eve getaway. It has high class dining, clubbing, fantastic fireworks, and the chance to sip Champagne on the Champs-Elysees. Around midnight, you can watch the Eiffel Tower’s light show. Another great place to spend the evening is Montmartre, as it offers spectacular views of the entire Paris skyline.

While you won’t get the same level of epic fireworks as you would in Sydney, there are still great parties through the city and many people light off their own fireworks from the Champs-Elysees. The city stays open late! 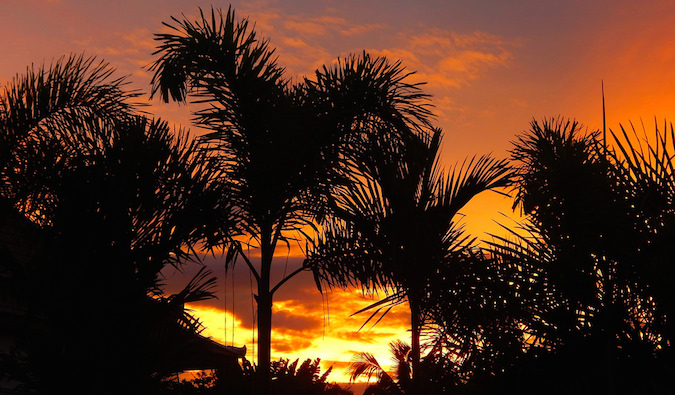 Over 20,000 young people cram on Haat Rin beach in Thailand to celebrate the New Year. Backpackers and travelers from around the world dance, paint themselves up, and drink buckets of alcohol from dusk until the first dawn of the new year. They fill the beach and it’s one of the wildest outdoor parties there is on New Year’s.

If you’re looking to start the new year on a beach and plan to be in Southeast Asia, this is one of the best and most fun places to be. I’ve spent three New Year’s here and loved every single one! 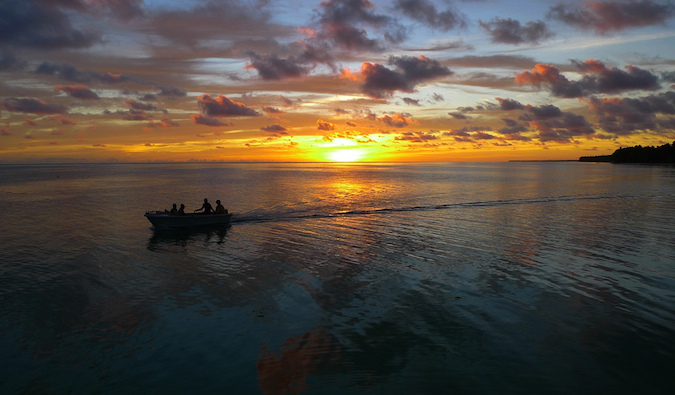 What better way to ring in the New Year than to be the first person to do it? This spot in the Pacific is officially the first place in the world to see the New Year. It’s like going into the future! Tourism here has picked up in recent years as the locals have tried to capitalize on that interesting fact but the island remains mostly an untouched getaway. There’s not much to do here and accommodation isn’t by any means luxurious but what better way to spend the new year than on an island in the South Pacific? Be sure to plan this well in advance as few flights go here and limited accommodation makes its difficult to find spots. If a single night of partying isn’t enough for you, head to Tokyo. The capital city of Japan starts celebrating on the 29th of December, giving you a few extra days to let loose and give the year a proper send-off. Not only do they start early, but the party almost doesn’t stop. New Year’s celebrations here continue until January 4th. While most of the major tourist sites in the city are closed during this time, the streets of Tokyo (as well as all restaurants and clubs) are packed with locals and visitors alike. The city offers up numerous fireworks displays, dancing, and all the karaoke you can sing! 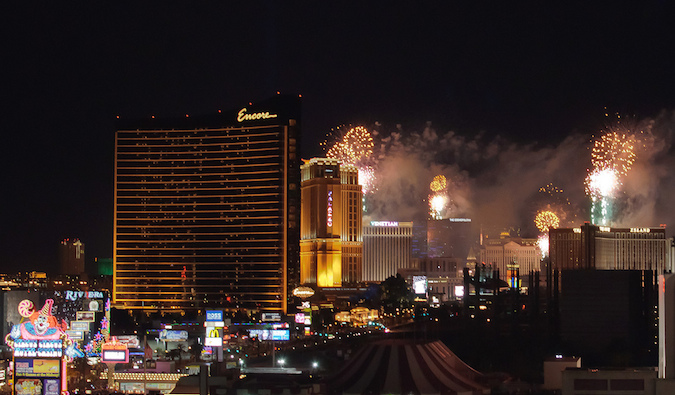 The city that parties every night throughout the year certainly knows how to throw a New Year’s Eve bash to remember. There are so many clubs, hotels, bars, and casinos to choose from in Las Vegas, Nevada, that it’s almost impossible to not celebrate in style. Outdoors, “The Strip” is closed to traffic so everyone can watch the grand fireworks displays high above the city’s neon lights. If you want to wade through the crowds, make your way downtown to Fremont Street and join the massive block party, complete with confetti, a massive wine toast, concerts by big-name rockers, and a five-block-long illuminated canopy 90 feet overhead, on which state-of-the-art sound and light shows are shown. 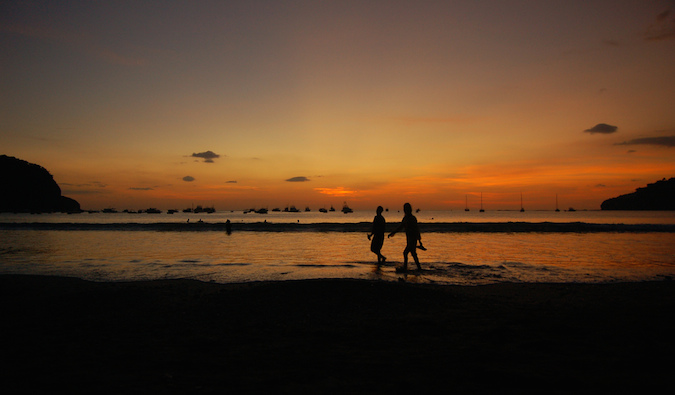 This holiday hotspot in Central America is a surfing and beach mecca for travelers of all ages and styles. During New Years, the city is bursting with tourists and locals who come from the surrounding area to enjoy time on the beach, with their families, and party hard (Nicaraguans sure know how to have fun!). This is definitely a place to go if you’re looking to get bit crazy and then nurse your hangover on the beach the next day. There’s usually a giant beach party where locals and tourists mingle, dance, drink, and countdown a new year together!
10. Edinburgh 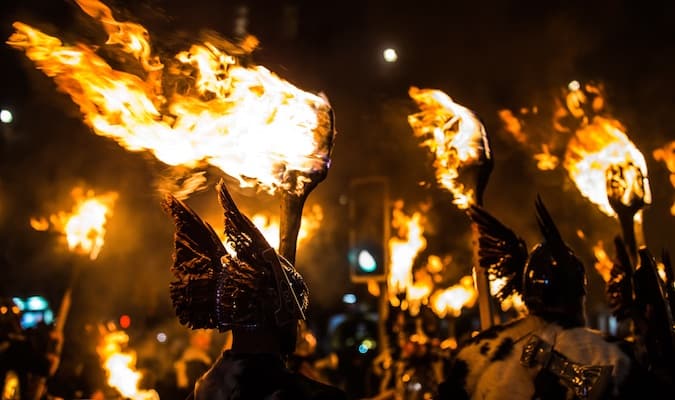 When it comes to New Year’s Eve celebrations, Edinburgh is one of those places that can’t be beat. Their Hogmanay is one of the most fun parties I’ve ever been too. Each year, over 100,000 people take part in the two-day celebration that involves a Viking procession, fireworks over the castle, bonfires, concerts, and a carnival. It’s out of this world fun. It gets super crowded and you’ll need tickets to the shows so be sure to book in advance. You can even walk the viking procession to the bonfire!